Among the countries that buy gold for national reserves, Turkey clearly stands out from the rest. The central bank of this country has added nearly 170 tons of the precious metal to its reserves, thereby replenishing them by 41% compared to last year (413 tons at the end of 2019). As of today, Turkey is considered the largest buyer of gold in 2020.

According to the World Gold Council*, the vaults of the Central Bank of the Republic of Turkey contain 583 tons of the yellow metal. These volumes do not look that impressive compared to the reserves of such countries as the United States or Germany that have thousands of tons. However, Turkey is taking serious steps to significantly expand its reserves. In particular, the rate of gold mining has been increasing in the country.

Hasan Yucel, the head of Turkey’s Gold Miners Association foresees the volumes of the metal mined to increase by 16% this year, reaching a record-high level of 44 tons. All this wealth is likely to be acquired by the central bank, which has a priority right to purchase the gold mined in the country and has been actively using this privilege since 2017.

The most important and promising resource

According to Yucel, Turkish gold deposits in the amount of 1,500 tons are more significant for the country than the recently discovered natural gas reserves in the Black Sea, as they should bring more profit. 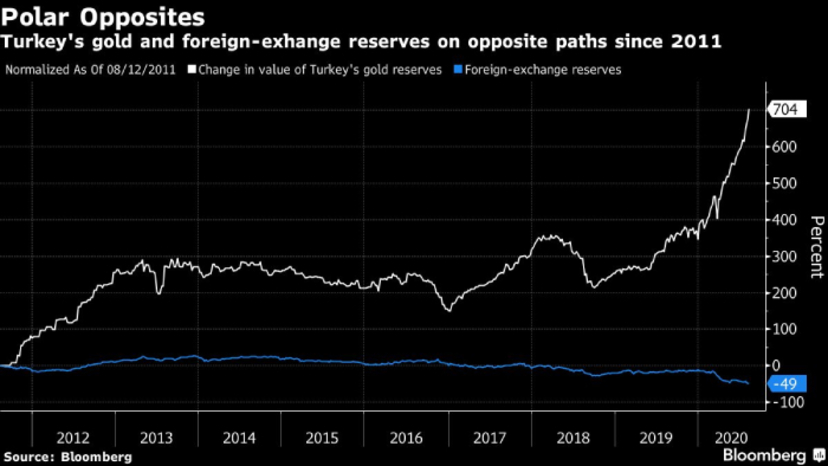 Not only financial institutions of the country, but also its residents are showing interest in the yellow metal. Turkey ranks fifth in the world in terms of domestic consumer demand for gold which amounts to about 160 tons annually.

Rethinking of the value

In today’s world, more and more people come to realization that gold is not just a luxury item and an object of admiration. First of all, it is the most important tool of Financial Security, which is extremely beneficial to possess. While currencies are under heavy pressure from the economic crisis, the cost of the yellow metal has reached record levels.

This serves as unequivocal proof that gold is capable of providing stability to countries, businesses and individuals.

2020 has become a turning point for natural persons involved in gold bar trading. Thanks to new special projects of the GIG-OS platform, it has become way easier, more convenient and safer to purchase this sought-after financial asset.

*The World Gold Council — the market development organization, founded by the world’s leading gold producers to stimulate demand for gold.

Rate this article:
Gold News
You May Also Like:
The New Victory of Gold: Russia
[VIDEO] What did little Luciano dream about, and where did it all lead to?
Summer’s Must-Read: gold outperforms platinum
RELATED NEWS
The unquenchable thirst for gold in the Middle East
Another country has entrusted its economic future to the precious metal.
Is the race for cosmic gold starting this year?
Humanity is ready to take a step towards the exploration of gold deposits outside the Earth.
Asian giant against the crisis: what do people in China think of gold?
What do the latest data from the mighty Eastern power say?
Prospects of gold: a breather before a new leap?
Should we expect the conquest of new frontiers?
Nigeria creates a “gold springboard” for its economic leap
The precious metal as the foundation of the nation’s well-being.
Egypt’s fascination with possibilities of gold
The people of Egypt have taken a fresh look at the precious metal.
Billionaires enter the battle for gold
The gold industry is in the spotlight.
Bankers: gold is the top asset of 2020
The grand successes of the noble metal astonished the whole world.
Where gold is heading to: expert opinions
A significant psychological barrier has been overcome. What’s next?
Gold is unstoppable: a new historical record!
The yellow metal has reached the top of the “financial Everest”.
Take the test
and find out if you are exposed to the Lack of Financial Security virus.
Register on the platform to receive the test.